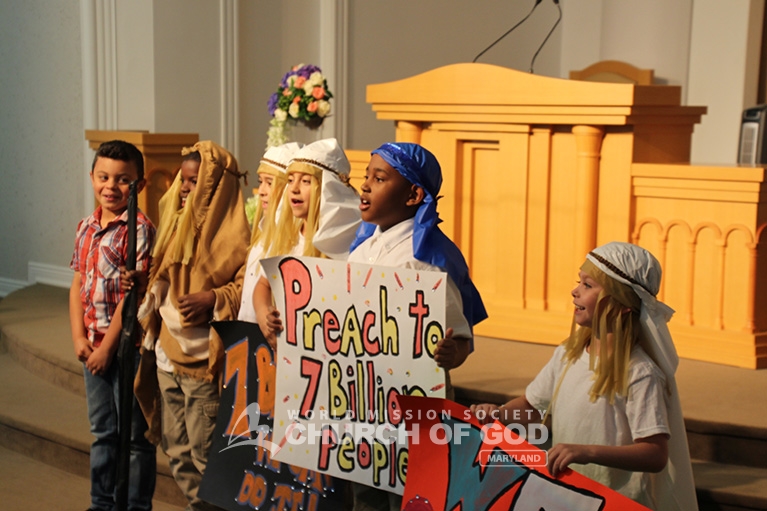 On May 15, 2016, the Church of God in Maryland hosted a biblical play titled “Jonah and the Whale.” The play’s actors—children’s group—began preparing weeks in advance. Even in their spare time, the children rehearsed their parts, and each one had a specific role—some helped paint and make props, while others assisted with the stage setup.

Church members, families and friends made their way to the Church sanctuary where the play would take place around noon. Once everyone took a seat, the host of the show introduced the play, and the performance began.

Entering stage left, Jonah appeared with the Lord. “Jonah, go to the great city of Nineveh and preach against it because its wickedness has come up before me,” said the little one who portrayed God.

In the Bible, God sent Jonah to preach to the people of Nineveh so they would repent and come to God. But Jonah feared and instead boarded a ship elsewhere. While Jonah was on the ship, God sent a great wind that created a violent storm in the sea. The ship threatened to break.

During the boat scene, the children brought out props to depict Jonah at sea with the sailors. They even created a sound of rushing waters and began to proclaim in a united voice, “What should we do to you to make the sea calm down for us?”

“Pick me up and throw me into the sea, and it will become calm. It’s my fault that this great storm has come upon you,” said Jonah.

Knowing the catastrophe was his fault, in order to save everyone on the ship, Jonah jumped into the ocean, and the storm subsided. Then a huge fish swallowed Jonah. He remained inside the great fish for three days and three nights until Jonah repented to God. The fish then spit Jonah out on dry land. And Jonah carried out the will of God, leading to the salvation of the Ninevites.

The play moved everyone’s heart who was in attendance. “Seeing the children come together like this is just beautiful. You can really see they made a lot of effort. I’m just so proud of my son right now. They all did a really great job,” said one of the parents. While it was their first time performing such a play, the children’s group altogether came to the conclusion that they would like to do it again!